This is the latest in a series looking at classic technology titles. For another example click here. 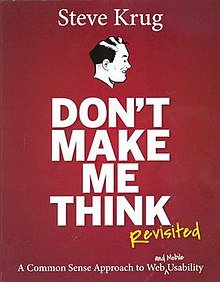 Don’t Make me Think! That title! There are few examples in publishing of a book title catching your attention and at the same time summarising what the book is all about. If books can be reduced to one big idea, then this is the perfect example. Essentially, if you want to build a website, don’t make me think when I use it. Now, fifteen years and a third edition after the book was first published (in 2000), is it still as relevant? Well, Steve Krug helpfully points out the original book’s limitations himself, in the introductory section to the latest edition. Most importantly the book was written before mobile became common. Nonetheless, the basic principle, that a user’s interaction with a website should be based on simplicity, is admirable and of course holds true for hand-held devices as for desktops and laptop PCs.

This is a book that displays its principles admirably. Krug is a great believer in using graphics, cartoons, and diagrams to explain his point. The book is very short (I read it in under three hours, and the original edition must have been even shorter).

Why is it such a compelling read? Because Krug isn’t afraid to reveal simple truths that are often hidden. That the back button is the most-used button in Web browsers, that (his “fact of life no2”) we don’t make optimal choices, but tend to “satisfice” (choose the first reasonable option) when we use a website. His “fact of life no3 is that we don’t figure out how things work. We muddle through, because it’s not important to us to understand all the details. These are excellent, fundamental points.

So what is the problem with the book?   That the book is too long! When I said it was short, it should be even shorter. This is because the agreed behaviour for websites, if you like the accepted iconography of a website, is actually quite small. We all agree on a few things, but no more than that. Krug’s book is little more than a collection of the things we agree on – and annoyingly some of those principles are only given right at the end of the book, in chapter 13. These fundamental principles are things like the most important things should be the most prominent, or the need for every page on the site to be easy to identify so you the user know where you are, or that things that are related logically should be related visually on the page – obvious enough, but easy to forget in the heat of designing the detail of an elaborate home page.

Beyond these few points, Krug himself insists quite rightly that Unfortunately, the things we can agree on when it comes to defining a usable website are fairly few. Once you have described them, there isn’t much else you can do without looking at specific sites and discussing specific problems, which Krug is not willing to do in this book. He states, convincingly, that beyond these principles, there is no average web user; all Web use is idiosyncratic, so all you can do beyond a certain point is test and see what users make of it.

In the meantime, what does fill up the space is quite a lot of irrelevant material that has little to do with usability. There is a long diatribe against an unnamed airline who don’t update their website with details of a potential strike – perhaps a valid point, but absolutely nothing to do with usability, or with making the user think.  There is even, at the end, an appealing photo of his son who, Krug explains, is currently looking for a job.

More fundamentally, when Krug attempts any kind of explanation for his feelings about the correctness of a site beyond these few fundamental principles, his argument becomes muddled very quickly. He has difficult defining quite what usability is; for mobiles, he suggests it means “delight, learnability and memorability”. What is meant by these terms? Well, delight is “I’ll know it when I feel it” and then describes SoundHound, a clever website indeed that can identify tunes by hearing them. Fascinating, but unrelated to usability. Other questionable chapters include an attempt to justify accessibility to brainless 22-year-olds, and complaining about the shady tricks that some marketing departments foist on us such as not including phone numbers – again, valid enough points, but unconnected with usability.

A more detailed and analytic account of the way people use websites would be a much more thorough exploration of a distinction Krug mentions almost in passing. He mentions different kinds of reading, and how humans scan web pages. Designing a page to be scanned is very different to designing a page to be read – but, tantalisingly, the subject is then dropped for the rest of the book and we continue looking at websites that are to be scanned.

Many of Krug’s battles from 2000 have today been won, but he is a highly entertaining writer and I suspect he has often been hired as a consultant simply because he has says what many people might have felt but not had the courage to state openly.  Not many usability experts state quite openly that a user test of one is 100% better than no user test at all – but we all know websites that didn’t even get any test whatever by a user before being launched.

So let’s celebrate the basic principle – we all like a website where we don’t have to scratch our heads to use it. It’s worth writing a book just to emphasize that a website shouldn’t make you think.

How web crawlers are putting booksellers out of work