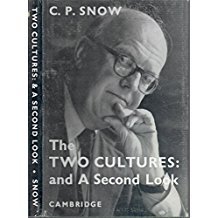 Academic publishing is all about science, and specifically life science. This was clear from a presentation at Academic Publishing in Europe, in Berlin, last week. Caroline Edwards, a literature lecturer at Birkbeck College, University of London, argued for a specific humanities publishing approach, and has executed the idea by co-founding the Open Humanities Press, a publisher run by academics.  She pointed out some fundamental differences between humanities and social sciences (HSS) and STEM (science and medicine) publishing; for example, the concept of a preprint article does not apply in HSS subjects. This led me to think more broadly about academic publishing for the humanities.

The debate over science and the humanities is not new. C P Snow wrote about the two cultures over seventy years ago, and was followed by such fascinating studies as Contrary Imaginations (1967), in which Liam Hudson described a fundamental difference between “scientific” and “artistic” ways of thinking; he distinguished (rightly or wrongly) between creative people (typically studying arts subjects) and non-creative people (who studied science and technology).

It is of course a simplistic distortion to characterize such differences, and yet it is certainly clear that the way scientists and humanities scholars do research is very different, and to shoe-horn all academic publishing into a single model is insufficient. Yet, despite publishing paying lip service to the need for a difference between arts and science publishing, all academic publishing currently follows very similar rules. An academic publishing landscape that attempts to force all researchers to follow the science article paradigm is not likely to be satisfactory across all subjects.

In the sciences, the fundamental unit of publication for science is the journal article. A scientist typically investigates some new area of knowledge (it is important that it hasn’t already been investigated) and publishes a result. This result is intended to advance the sum of human knowledge. Such a scenario is not applicable to the arts, where the fundamental unit of publication is the monograph, or at least an essay collected in a book comprising a compilation of essays on a theme. And to say you cannot write a PhD on Shakespeare and (say) the Renaissance because someone has already written something similar is unlikely to be much of a barrier to writing another one. There may be a revival in some earlier idea or view of Shakespeare that has come back into fashion –  a further difference between the arts and the sciences.

Simplifying somewhat, to illustrate the fundamental difference between the two cultures, it is perfectly possible to complete a first degree in the arts without ever having read any journal articles. In contrast, it would be unthinkable to complete a science first degree in the same way. Having said this, publication in arts periodicals continues to thrive – but many arts academics would say a journal article is only a step towards a full monograph.

The type of research carried out is another difference. A doctorate is supposed to be an advance in human knowledge, and a science-based PhD would always require a literature search to show that the topic has not already been researched in the same way. Yet it would hardly be possible to spend three years researching an entirely new angle on Shakespeare.

So, while Snow’s ideas look hopelessly out of date, Caroline Edwards is absolutely correct in the need for a different model of publishing in the arts that corresponds to a fundamentally different type of research – despite a publishing world that tries to keep them to a single model.