Are there good and bad metaphors? 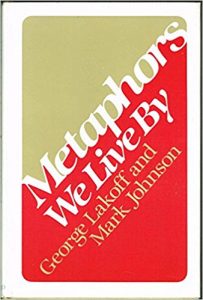 George Lakoff is famous (according to Wikipedia) for the “conceptual metaphor theory”, which is that people are influenced by the metaphors they use.

Intrigued by this claim, I read the short book Metaphors We Live By (1980), by Lakoff and co-author Mark Johnson.  Sure enough, by the end of the book, the authors demonstrate (to their satisfaction, if not to mine) that if you choose the wrong metaphor, then who knows what might happen. “Drastic metaphorical differences can result in marital conflict”, state the authors, a claim I never expected to encounter in a book about linguistics. If Adam thinks marriage a haven, but Eve thinks marriage is a journey, then problems lie ahead. No doubt there will be disagreements, but not, I think, because their metaphors have landed them in different places.

How did metaphors become a yardstick (nice metaphor, that) of the good life? In terms of argument, the book proceeds as follows: it’s what I call the “slyly introduced hammer blow”. If you want to say something controversial, don’t say it upfront, but dress up your argument in the most persuasive terms that nobody could disagree with. Then repeat the process two or three times until, when the reader is lulled into acceptance of your drift, you insert something highly contentious. Don’t say it is contentious; simply state it follows logically, as night follows day.

Hence, Metaphors We Live By begins by saying much of human discourse uses metaphor – I can’t deny that. The metaphors we use can often be grouped, and Lakoff and Johnson capitalise the names of these groups,  a charming gesture. Thus, we have groups such as

TIME IS A LIMITED RESOURCE, e.g. “Do you have much time left?”

The argument proceeds without controversy, in easily understood steps such as these, until suddenly signs of metaphors are linked to morality.  For some strange reason, Lakoff and Johnson object to metaphors that do not fit into one of their metaphor groups. Hence the seemingly inoffensive phrase “the foot of the mountain”, which is condemned outright:

“Examples like the foot of the mountain are idiosyncratic, unsystematic, and isolated. They do not interact with other metaphors, play no particularly interesting role in our conceptual system, and hence are not metaphors that we live by.”

Where did this argument come from?  Commentators have been complaining for years about “stale” use of language, and “dead” metaphors, but they are not usually trained linguists.  For Lakoff and Johnson, the metaphors we use have to be those that “enter into our everyday lives” – otherwise they are dubious.

The claims about the moral value of choosing the right metaphor are only fully stated in the book’s final chapter, when the authors become positively lyrical. I bet you had no idea that by adopting the correct use of metaphor, as described by Lakoff and Johnson, your life will be less “impoverished”.

I completely agree that in a conversation, “meaning is negotiated: you slowly figure out what you have in common.” But to say that the well-known “conduit” principle, which states that ideas are objects, linguistic expressions are containers, and communication is sending, is “pathetic” or even “evil” seems to be overstating the case.  “When a society lives by the Conduit metaphor on a large scale, misunderstanding, persecution, and much worse are the likely products”.

How then should we use metaphor? That isn’t so clearly described, but there is a reference in Chapter 30 to “appropriate personal metaphors that make sense of our lives”, in other words, that provide “self-understanding”. If self-understanding is possible through metaphor, why not then claim that metaphor enables “ritual”, “aesthetic experience”, and “politics”- and the authors have a section dedicated to each of these topics. Why politics, for example? Because “a metaphor in a political or an economic system, by virtue of what it hides, can lead to human degradation.” Lakoff &amp; Johnsen quote the metaphor “Labor is a resource” and point out the labor could be “meaningful” or “dehumanized”. This seems to be an extreme version of the Sapir-Whorf hypothesis, that words in a language determine the way we think. It recalls the famous Roman proverb quoted by Marx in Capital, “Pecunia non olet”, meaning that cash – coins and, today, notes –  carry no associations from the possibly illegal and devious things they might have been involved with in an earlier transaction. For Lakoff, metaphors seem to be like coins, in that coins do not carry associations of the situations in which they have been transacted, but some moralists believe that they should. For Lakoff, the simple phrase “labor is a resource” is deeply suspicious: “the blind acceptance of the metaphor can hide degrading realities”, since phrases such as these are often used in a context where labour is seen as a cheap, undervalued resource.  Yet Lakoff himself earlier in the book has no difficulties with TIME IS A LIMITED RESOURCE.

Next time I use a metaphor, I’ll think carefully about how it can enter my everyday life.