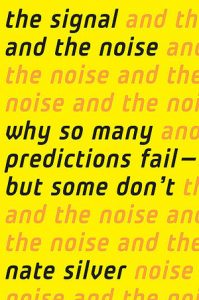 Nate Silver likes a bet, so much so that he quit his job and became a full-time poker player for some years. So perhaps it is not surprising that this is an author with a passion for probability, whose interpretation of Bayesian reasoning is gambling related: “the most practical definition of a Bayesian prior might simply be the odds at which you are willing to place a bet.”

He sets out to show how many situations comprise a mixture of signal (valuable information that enables us to learn about it) and noise (confusing messages that make it difficult for us to interpret). Paradoxically, it is something of a challenge to determine just what is signal and what is noise in Nate Silver’s own book. It’s not a straight popular guide to probability and statistics, because it’s inordinately long (about twice the length it most popular science books), and that’s perhaps because it contains more than one book. It’s an autobiographical account of how Nate Silver survived (and for a time made money) as a poker player; in fact, at the age of seven was obsessed with baseball statistics:

As an annoying little math prodigy, I was attracted to all the numbers in the game, buying my first baseball card at seven … and creating my own statistic at twelve.

The theme of the book is perhaps clearer in the US original edition, which had the subtitle “why most predictions fail – but some don’t”, which is changed in the UK edition to the tamer “The Art and Science of Prediction”. In other words, you are reading this book for the predictions, not for the science or the history (which explains some of the oddities in the book, mentioned below).

As a primer, his message is simple: Bayesian reasoning, by which he means accepting an incomplete set of data and using probability to estimate an outcome, is the best way to approach many situations where the full data is not (or cannot) be known. And his application of Bayesian reasoning is disarmingly clear. Silver inspires confidence when he talks about poker, as well, since to play poker requires much more than just a Bayesian calculating machine.  In addition to poker, he covers in this wide-ranging survey climate change, and how to beat the stock market (you can’t, at least not for long). And he explains very clearly why brokers are unwilling to sell stocks in a bubble. This is Silver at his best: his experience of poker playing gives him good insight into the psychology of many probability situations where human motivation and self-esteem can be as important as the mathematics. In poker, you bet on a hand because you want to, not only when the probability tells you to bet.

It seems churlish to complain about such a readable and fascinating title, but there are faults. Most importantly, the very strength of the book is also its biggest limitation. Since the book is a roll-call of Silver’s interests – poker, baseball, climate change, election forecasting – it’s perhaps understandable that he covers each of them in considerable detail and in the same way. This works well for poker, but Silver misses some major angles by simply concentrating on his enthusiasms and not seeing a bigger perspective. He doesn’t mention that some sports are easier to predict than others; it is self-evident that football (soccer) results are far more difficult to predict than, say, basketball, where the average scores for each match are considerably higher, which means there is less luck (noise) involved. In football, one lucky deflection can determine the outcome; such a scenario is extremely unlikely in basketball. He uses the same technique for discussing climate change, a major academic question, as he does for poker; he seems almost surprised to discover that climate change decisions can be affected by politics.

He is weak when he gives historical examples, and here he is guilty of sweeping generalizations. For someone so attuned to what constitutes good or bad reasoning, he has little time for historical nuances. His journalistic style, a kind of no-nonsense school of writing where all his expert commentators seem to be marshalled to reinforce his argument, lets him down the further back in time he goes. So, for example, the Industrial Revolution happened in 1775, and was “sudden” (in the notes to the book he admits “I chose the year 1775 somewhat arbitrarily as it coincides with the invention of James Watt’s steam engine and because it is a nice round number”). The invention of the printing press, according to Silver led directly to religious wars: “But the printing press would first produce something else: hundreds of years of holy war.” What’s more, “The information overload after the birth of the printing press produced greater sectarianism”.  He goes further to claim that these “sectarian wars in Europe in the early days of the printing press” were the result of Bayesian over-rigorousness, when “one person who holds there is a 0 percent probability of something argues against another person who holds that the probability is 100 percent.” This is history with a very broad brush, and, to be honest, the kind of historical assessment you might expect from someone who thought the meaning of life could be found by compiling baseball stats in his bedroom.

Elsewhere he describes one of his specialities, forecasting election results, and states his spin on Bayesian reasoning, which usually involves betting – after all, if you meet someone with a different estimate of probability of a situation to yours, either you change your opinion, or you bet on it. It’s a fascinating, if one-dimensional, view of the world.

Despite his fondness for a bet, his acceptance of scientific principles over guesswork is disarming.  When challenged about the accuracy of his own election forecasting service, he happily accepts that the aggregated results several electoral forecasts are typically more reliable than any one forecast (including his own).

This emphasis on statistics produces some startling results.  He quotes approvingly an academic article that claims that two-thirds of all research-based articles are false, which is later qualified to state that two-thirds of a sample of research findings could not be replicated – not quite the same thing. It is a paradox because at various points in the book Silver seems to be moving towards a very interesting position that calls for a human-influenced Bayesian reasoning, which is a genuinely valuable conclusion.

So, a remarkable book – many excellent insights, a clear introduction to Bayesian reasoning, some astonishing figures for the number of dollars he has won (or lost) at poker, and a lasting image of a seven-year-old poring over baseball statistics in his bedroom.

Facts vs. Fake News: Who decides what is True?